OUR SERVICES
The Latest In Radiation Therapy Technology

When it comes to cancer care, EXPERIENCE matters. Drs. McGahan and Seither have received elite training within specialized and fast paced hospital systems, and have collectively practiced Radiation Oncology in Southern Kentucky for over 50 years.

Real education of a physician is developed over years of hands on training. Combining their board certifications and years of radiation treatment planning, with compassion for patients and families, has made Drs. McGahan and Seither one of the most valuable teams of cancer specialists in our area. Additionally, strong relationships with the local medical community, as well as physicians based in the Louisville and Nashville areas, enable patients to receive the highest quality of care available! 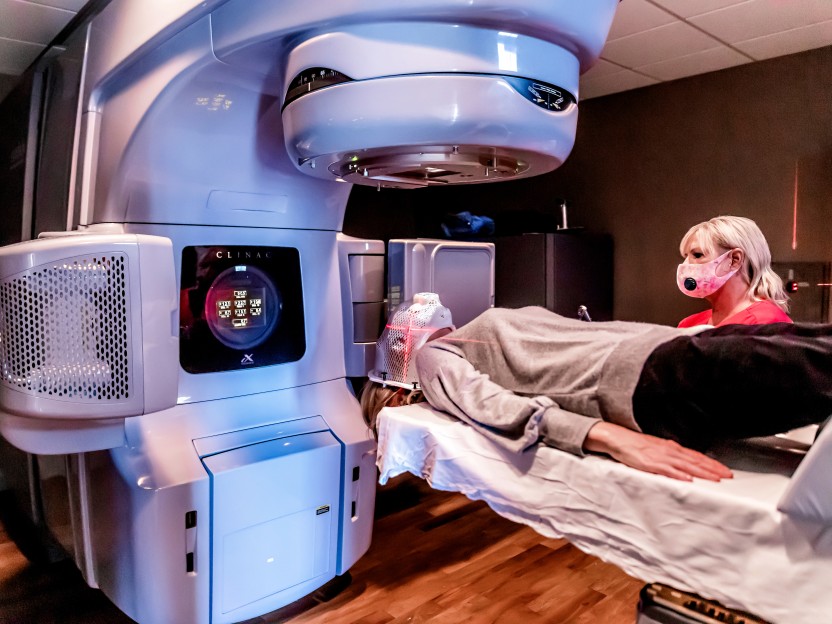 There are many types of external beam radiation therapy, all of which share the goal of delivering the highest prescribed dose of radiation to the tumor while sparing the normal tissue around it. Each type relies on a computer to analyze images of the tumor in order to calculate the most precise dose and treatment path possible.

Intensity-modulated radiation therapy (IMRT) is an advanced mode of high-precision radiotherapy that uses computer-controlled linear accelerators to deliver precise radiation doses to a malignant tumor or specific areas within the tumor. IMRT allows for the radiation dose to conform more precisely to the three-dimensional (3-D) shape of the tumor by modulating—or controlling—the intensity of the radiation beam in multiple small volumes. IMRT also allows higher radiation doses to be focused on the tumor while minimizing the dose to surrounding normal critical structures. Treatment is carefully planned by using 3-D computed tomography (CT) or magnetic resonance (MRI) images of the patient in conjunction with computerized dose calculations to determine the dose intensity pattern that will best conform to the tumor shape. Typically, combinations of multiple intensity-modulated fields coming from different beam directions produce a customized radiation dose that maximizes tumor dose while also minimizing the dose to adjacent normal tissues.

Because the ratio of normal tissue dose to tumor dose is reduced to a minimum with the IMRT approach, higher and more effective radiation doses can safely be delivered to tumors with fewer side effects compared with conventional radiotherapy techniques. IMRT also has the potential to reduce treatment toxicity, even when doses are not increased. Due to its complexity, IMRT does require slightly longer daily treatment times and additional planning and safety checks before the patient can start the treatment when compared with conventional radiotherapy.

Stereotactic radiosurgery (SRS) is a highly precise form of radiation therapy initially developed to treat small brain tumors and functional abnormalities of the brain. The principles of cranial SRS, namely high precision radiation where delivery is accurate to within one to two millimeters, are now being applied to the treatment of body tumors with a procedure known as stereotactic body radiotherapy (SBRT).

Despite its name, SRS is a non-surgical procedure that delivers precisely-targeted radiation at much higher doses, in only a single or few treatments, as compared to traditional radiation therapy. This treatment is only possible due to the development of highly advanced radiation technologies that permit maximum dose delivery within the target while minimizing dose to the surrounding healthy tissue. The goal is to deliver doses that will destroy the tumor and achieve permanent local control.

Although SRS commonly refers to a one-day treatment, physicians sometimes recommend multiple stereotactic delivered treatments. This is important for tumors larger than one inch in diameter as the surrounding normal tissue exposed to the single high dose of radiation must be respected and limited, and the volume of normal tissue treated increases proportionally to the tumor size. Delivering the radiation in a few sessions as opposed to one, can improve safety and allow the normal tissue to heal in between treatments. Therefore, fractionating the treatment allows for high doses to still be delivered within the target, while maintaining an acceptable safety profile. This procedure is usually referred to as fractionated stereotactic radiotherapy (SRT), and typically refers to the delivery of two to five treatments of focused radiation.

Stereotactic body radiation therapy, or SBRT, is a cancer treatment that delivers extremely precise, very intense doses of radiation to cancer cells while minimizing damage to healthy tissue. SBRT involves the use of sophisticated image guidance that pinpoints the exact three-dimensional location of a tumor so that the radiation can be more precisely delivered to cancer cells.

SBRT is typically used to treat small, early-stage lung cancer and pancreatic cancer, or cancers that have spread to the lung, liver, adrenal gland, or spine. It is delivered through devices called linear accelerators, which form beams of fast-moving subatomic particles. SBRT is performed while you are lying on a table. Imaging technology on the linear accelerator helps ensure you are in the same position for every session and that the target area does not shift during treatment. You will be awake during the procedure, which usually takes between 30 minutes and an hour.

Conventional radiation is typically delivered in relatively small doses each day over several weeks. This can delay or interfere with other cancer treatments, such as chemotherapy. By contrast, SBRT can usually be given in five or fewer daily sessions and requires no anesthesia. SBRT also can lead to better outcomes and fewer side effects than conventional radiation therapy.